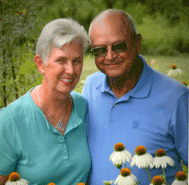 Bob and his wife, Jane, live on the family farm which was established in 1868 by his great grandfather. The farm has grown since its beginning , from the original 80 acres to 640 acres. Bob was raised on the farm. He worked and played there all his life. The pastures and corn fields are featured in his stories. Bob and Jane raised three sons and taught them the rewards of diligent work. After farming for 48 years they retired in 2008.

Bob started writing as a hobby. He had written some small essays before and some church skits, but never a novel. In fact, his first novel “The Nightgown.”

To his surprise, he discovered readers actually liked his prose. He continues to write using the thoughts from his many hours in the tractor or combine cab. His writings give a different perspective on the lives of rural America. His stories take the reader on a trip which reveals not all rural living is drudgery and heart ache, but there are many fun and romantic times involved.